Anna and her husband own a home in Lakewood, Ohio that they have been renting out for a while when a change in their personal life lead them to move out of Ohio. While going through the moving process, they decided that they will sell their Lakewood home.  The couple visited the home to see what repair the home would need. There was nothing too serious that needed to be repaired until they got downstairs to the basement. There was a large crack along the floor with one side starting to rise and several small wall cracks. Luckily there was no water there at the moment but they saw evidence of water at the base of the wall.  With the home being over 100 years old, Anna knew they needed a professional. After viewing several estimates, The Basement Guys had the best recommendation for the best price.  Anna and her husband plan on moving sooner rather than later so they wanted the project quickly so The Basement Guys went to work. The first part of the project is to remove the cracked floor and install a new one but before pouring cement we waterproofed their basement by installing our superior WaterGuard® System. With the age of this home, it's inevitable water will start leaking through the old foundation walls and The Basement Guys want to prevent any future water damage. For even more protection, we also installed a sump pump. Once WaterGuard® was put into place, The Basement Guys used cement to seal the system in place while replacing the cracked floor.  The next step to this basement project is to stabilize and secure their foundation walls. During the initial appointment, our Basement Expert discovered that their foundation walls are starting to move inward and bow, our recommendation was to install PowerBrace™ Wall Repair System. The PowerBrace™ System is a steel I-8 beam that was installed to their weak foundation wall that prevents any further movement. The future new homeowners have the possibility to tighten the brace, bringing the wall back to its original place. In a couple of days, The Basement Guys turned their old basement into a new useable area for the future homeowners. The Basement Guys are your one-stop-shop for all your basement needs! Schedule your free estimate here!

The Basement Guys To The Rescue

This is what their basement looked like before The Basement Guys started! If you look closely, you can see the foundation wall starting to bow and their uneven floor. 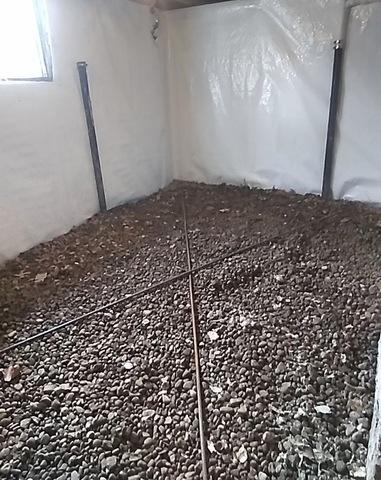 With a large raising floor crack like theirs, the best course of action is to start from scratch! 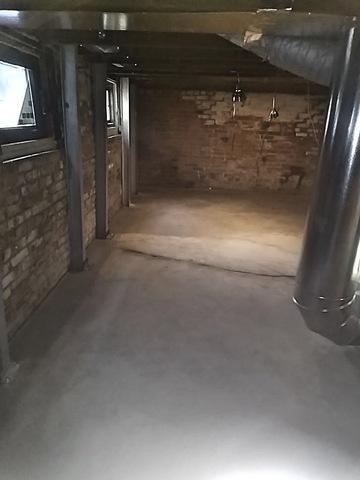 The job is complete! After installing WaterGuard® System, PowerBrace™ Wall Repair System, and repairing their floor, their home is officially ready to be put on the market.